It might sound incongruous but mathematical theory seems to hold the key to the success or failure of a fledgling industry: air-taxis.

John Gapper writes in the FT about the launch of new air-taxi businesses in the US. The aim of these businesses is to ferry a small number of passengers (6 or so), point-to-point at prices lower than typical corporate jets. He comments in this context:

What if that world were democratised and more people, including sales representatives or executives of small businesses, had their own taxi service of the air? They, too, could fly directly from small airports close to their homes to others near their destinations. If such a service were affordable, it would save a lot of discomfort and wasted time.

But there are a number of obstacles, the most significant of them, it seems to me, being the need to have large numbers of air-taxis scooting around from place to place. The fundamental (regulatory) requirement for operating an air-taxi service is that flights cannot operate according to a fixed schedule. This means that profitably operating a fleet of jets hopping from point to point can be a fearsome exercise in scheduling. This is where the math comes in. One company has even hired "a group of mathematicians from the Santa Fe Institute", according to John Gapper.

By the way, seeing the word "democratised" in the article got me all excited about how big the potential market could be for air-taxis. I got the impression that anyone and his dog could hop into one and go for a jaunt. Not really, in actuality.

Air-taxis are a democratising business in the sense that they offer a premium service (point-to-point, personalised) to larger numbers of people than before. But tickets aren't cheap -- one company expects to charge on average "about twice a flexible economy fare for a similar distance". That's still a pretty good deal for those in the market. 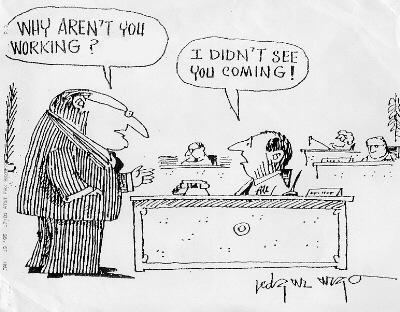 I resisted, pushed and yelled but I've finally caved in. New category: strategy.

Why did I resist?

Lee Gomes writes in the Wall Street Journal about how company strategy is often simply the conventional wisdom of the day. Today's conventional wisdom will be derided tomorrow with the benefit of hindsight, says he, so can companies really affect (and effect) their future by following a certain strategy? He's got some good examples to support his view that companies' destinies are just so much flotsam on the sea of history, but I'm not completely sure that strategy has no place in the corporate toolkit. He writes:

Perhaps the best strategic advice for a company is to ignore strategic advice, because all it will be is warmed-over conventional wisdom. Instead, companies should make sure they are on the right side of history, and then try to do whatever it is they do as well as they can.

If that sounds unacceptably passive, consider the tale of Carol Bartz, chief executive of Autodesk, the big engineering software company.

At the height of the dot-com bubble, Ms. Bartz suddenly found herself being left off the sorts of "Most Influential Business Leader" lists she had routinely been included on in the past. The reason: She was ignoring the Internet and stubbornly sticking to her knitting.

Last month, though, a prominent business weekly printed such a list, and Ms. Bartz was once more on it. The reason: She was ignoring the Internet and stubbornly sticking to her knitting.

Link: Picking New Strategy? Getting on Right Side Of History Can Be Key (subscription required)

Globalisation according to Swaminomics

This post defies classification. "Economics" is only a fill-in.

Swaminathan S Anklesaria Aiyar writes on globalisation. He ends with the following para but the rest of the article is what you'll find a completely new point of view:

Globalisation for me is not just the movement of goods and capital, or even of Aiyars. It is a step towards Lennon’s vision of no country. You may say I’m a dreamer, but I’m not the only one. I hope one day you’ll join us. And the world will be one.

Link: My family and other globalisers

Ask and ye shall receive

...receive much more than you bargained for, that is.

"We should be held responsible for our mistakes, but not for everyone else's," the accountants say. Firms fear being wiped out by corporate meltdowns, such as Enron and Parmalat, if smarting investors seek damages from auditors, regardless of their culpability, simply because they have the deepest pockets.

But during discussions with the government it became clear their pleas would be answered not just with a sharper delineation of responsibility, but also with an entirely new way of being held responsible.

And what is this new way? Jail-time! Heh, heh.

For the complete context, see FT.com / Business life - Sting in the tail could lead to jail

Came across an interesting article today about the way in which India's public TV operator is using SMS during telecasts of cricket matches. Nothing new, you might think, except that, according to the article, people's responses are being used in a predictive fashion.

Doordarshan [the TV operator] is using SMS interactivity in a very novel way for ODIs against Pakistan. "It is happening in real time, where questions are asked and output is shown in a minute. The viewers are constantly involved in the match and feel a part of decision making with questions like: should no. 5 batsman be moved up? Will the batting side score more than 300? Which next bowler should be brought in, etc," says Singh.

Since I'm not in India, I haven't even seen these new features. So I have no idea whether these predictions and choices are conveyed to the coach/manager in real time and whether they are taken into account for on-the-field decisions. Is anyone monitoring the performance of India's back-seat coaches, I wonder. (Satish: would you comment?)

This is all extremely interesting (and perhaps in a grey area as far as the official ICC rules are concerned?). It could also be a source of competitive advantage for the team with the most knowledgable, enthusiastic fans.

This seems similar to Technology Review's Innovation Futures initiative which aims to predict technology developments by harnessing the intelligence of many "market" participants.

All very interesting.. commonalities exist across:

I'm getting more and more excited about this whole theme. Will aim to post some concrete examples (as far as possible) about my work as well when projects get underway.

If you're using RSS to read this blog, please point your feed reader to my new RSS feed at http://feeds.feedburner.com/GreekComplexity. I also have an RSS feed for my Flickr photos: http://www.flickr.com/services/feeds/photos_public.gne?id=80439303@N00&format=rss_200

If you're not using RSS yet and haven't decided what reader to use, I recommend FeedDemon. FYI I don't get paid if you buy the software. :-)

If you're not using RSS yet and don't know what it is, this page provides a good introduction: http://en.wikipedia.org/wiki/RSS_(file_format)

Barry Ritholtz writes a killer piece on how the music industry is dealing with the threat of P2P, and why it's doing it all wrong.

Apologists for the industry are replacing the catchphrase “Its illegal” with a new mantra.

He then proceeds to demolish this view utterly and completely. Before one realises where the thunderstorm came from, he ends with:

I’m all for moral behavior. However, I have no patience for an ethics lectures from a corrupt and incompetent ring of real pirates.

The English language does not contain the superlative that can do the article justice. Bravo.

Barry Ritholtz launches a new column for the informed but not sophisticated investor. Intro:

For the novice investor, there are plenty of sites that will help them "dip their toes in the water." For the pros, more data and commentary is available than could be read in lifetime. A great void, however, stretches between the two. Its like a barbell. There is no "Sophmore" commentary between the newbie and the more sophisticated investor.

Ironically, that transition period is where investors do themselves the most damage. Just as they feel they have learned a thing or two -- more confidence begets larger and more aggressive trades -- they get mangled.

Link: The Big Picture: The Apprentice Investor and his first column is Apprenticed Investor: Expect to Be Wrong