I tried a bunch of 3G phones for the first time today at a Starhub store. A mixed experience. Here's what I found:

[from collision detection] I'm mighty impressed by this:

Sci-fi author and blogger extraordinaire Cory Doctorow has for two years been experimenting with an intriguing publishing model: Every time he writes a novel, he sells the print edition at normal bookstore prices, but also freely gives away an electronic copy of the text online. His believes -- and I agree -- that an author's worst fear is not piracy but irrelevance: He'd rather have more people reading it than not. As it turns out, his strategy worked: The free giveaway created buzz and word-of-mouth, and his books have sold far more than his publishers originally expected.

What's particularly neat is that Doctorow is now releasing his books with licenses that allow people to make "derivative works" -- to remix, edit, or re-present the book in an entirely original format. Again, traditional publishers thought he was insane, and again they were wrong. Designers and webheads created all manner of cool byproducts that created yet even more buzz, and his sales went even higher. By allowing people to muck with his work, he effectively benefits from hundreds of hours of free labor of supercreative folks around the world.

The coolest remix of all? Second Life, the online virtual world, held a contest to see which of their player/citizens could design the coolest in-game version of Cory's latest book

This is a variant of honour system/tipping-jar systems that some online writers and websites have used in the past. Except that there is no tipping-jar in this case.

But then that is an oversimplification and misses a subtle point.

Whereas tipping-jar systems are exactly like their offline equivalents (buskers with a hat on the ground in front of them) in that the tip is a means of subsistence, Cory Doctorow's model is geared towards self-promotion. In that respect, the online version of his books is not the "product" -- it is "marketing collateral".

But even more, I love this man's model for "extended" self-promotion: how obvious and yet what genius to open his creations for others to make derivative works!

I will relate this story with great relish in future each time I hear someone doubting open source and/or the power of communities as legitimate models for making money outside the Internet world.

Ed Sim is a genius! Either that or he has the inside track at Microsoft ;-) See this post to find out why I say that.

Microsoft on Thursday laid out an ambitious goal to create a new generation of internet-based services to boost its growth rate, potentially bringing in advertising, subscription and transaction revenues to supplement its more mature businesses.

Microsoft's new focus on services reflects the success of internet companies like Google and eBay, as well as Apple's iTunes music service. While depending on advertising or transaction fees for their income, these and other internet applications are types of software application that are delivered over the internet, rivalling Microsoft's more traditional way of selling software.

Now what remains to be seen is whether they can actually make their strategy work. If it is to work, it has to change from their usual shove-it-down-consumers'-throat approach (also used in their MSN division) to a let's-make-stuff-that-people-want strategy.

Ed Sim makes an interesting observation about Microsoft having lost its stranglehold on consumers. Never thought about it like this, but now that he mentions it, it seems so obvious. No wonder they're looking at SMEs, enterprise customers, mobile, gaming and all those other new (for them) areas.

One big value for Microsoft has been its hold on the desktop as Tim Oren strongly points out, but as we move more and more into a web-based world its strength is diminishing.  Look at Google, Firefox and new scripting services like Greasemonkey and Yubnub which are increasingly offering users more and more functionality through a web-based interface.  I am sure Microsoft will get it right with Longhorn but it has taken way too long and many a more nimble, startup has out-innovated Microsoft and decreased its competitive advantage.  While the OS is important, Microsoft has lost its complete and utter dominance as we move to a service-oriented world where broadband is everywhere, apps are in the cloud, and the browser becomes king.

Stupid question of the day

Is it just late or is there really no obvious answer to this question: why are food containers round more often than they are square or rectangular? Square containers are so much easier to store in the fridge than round ones.

Round pots and pans I understand -- a round shape distributes heat evenly but that isn't an explanation for containers. Are round containers easier to make than square ones?

The Greek in Greek Complexity

I'm reading an absolutely rivetting thriller at the moment. Take this gem for instance:

...Now mimic the analysis of Section 1.8 to 1.10 to conclude that the binary relation

if and only if

is the probability that consumption from time

I was nodding off while reading this book at 2 am but seeing this many clauses in one sentence actually made me burst out laughing!

The weird thing is, the equations and all the other hieroglyphics in the book often make more sense to me than the text itself. Why do some academics express themselves so cryptically when they write, I wonder.

This is from a book on financial economics that I'm reading as part of a course on asset pricing theory. Attended my first class last week. Very interesting subject and the instructor too is good at linking abstract concepts to real-life examples. Will see if I can post a few (less frivolous) posts on the subject as we go along.

I have been thinking about the idea of companies co-opting customer communities as an extended salesforce in the wireless area. I think it is only a matter of time before someone monetises the notion of using informed consumers as salespeople for mobile media. This is an extension of Amazon's idea of telling me "other people like you bought xyz item". Instead of merely giving me an automated recommendation, I think there is an opportunity for a company to set up a platform that will allow consumers to both buy and sell content, and earn commissions/credits on each piece of content they sell. Obviously, trusted referrals have a higher sales success rate than blind sales or software-assisted (Amazon-type) sales.

This is not a new idea. Two of the most obvious (and oldest?) examples of companies that have profited from this idea are Tupperware and Avon, which have assembled armies of women who sell these companies' products to other women. Network marketing/multi-level marketing are extensions of the same idea.

It seems like an obvious next step for someone to do this in wireless media:

Now if you accept my idea, some questions to think about are: what will it take to get such a platform going? How will such a platform be monetised? Who will be the first to recognise and realise this opportunity? Will it be:

Of manhole covers and creativity

Came across this interesting post that relates the patterns on manhole covers to the extent of creative thinking by societies at large. Confused? Go look!

Two manhole covers--one about 100 yards from my Colorado house: 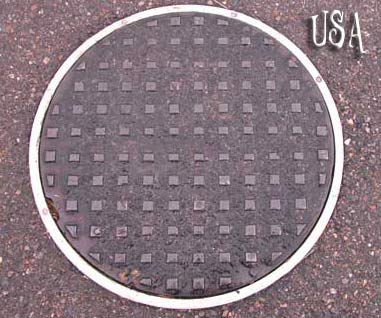 and the other on a typical residential district in Tokyo.

Beauty and attention to design detail... everywhere I turned during my two week stay (Tokyo and Kyoto), I saw it. Every--and I mean every Japanese restaurant (including the fast-food sushi joints) had an architectural bent. A sense of style. An aesthetic sensibility you just don't see throughout the US!

Reposting this because Bloglet had problems sending this out by email yesterday.

Just thought I'd post a pointer to a post I made in June about risk management and other sundry topics -- reader svk has added a couple of very interesting comments to the post and I have posted a response.

Pointer to comments from Tomi Ahonen

Tomi Ahonen has made some very interesting comments as a follow- up to my post where I talked about his predictions for mobile telecom. Just a pointer-post.