This isn't about the whole privacy issue. Enough bits and bytes have been devoted to that topic.

Facebook refuses to recognise the RSS feed I generate on my blog and on del.icio.us. It claims that the URL isn't valid. The same URL that I've been using for a while now. Crap.

Checked that the feed had actually generated entries yesterday and so it has. Is it accessible to robots? Yes, it is.

This is just one step worse than my previous situation where although FB had my RSS feed and could access it, it wouldn't go and do it on its own. Every time I created a new RSS entry, I'd have to manually get FB to go and import the new items. Now even that doesn't work. Crap.

And in case I didn't mention it: crap.

If you want to access the feed, it's at http://feeds.feedburner.com/GreekComplexity and there's also an email newsletter option at the top-right corner of http://www.murli.net/.

An interesting coincidence. I ranted yesterday about Dave McClure's conclusions about

I had a tiny voice telling me I'd end up with egg on my face for stating my opinions so vociferously. But look what happened almost immediately.

Today someone pointed me to a report by VCCircle about a planned IPO by Just Dial, an Indian directory service.

VCCircle speculates that Just Dial could be looking to IPO at a valuation of over Rs. 2000 crore (20 billion rupees or about $430 million).

Is this a successful exit? Most definitely. The article says that Just Dial had revenues of Rs 134 crore in the year ending March 2010. That means a trailing P/S ratio of 15x when they list. That's not chump change!

Has a large blue-chip Silicon Valley VC made money in this deal? Sure. Sequoia will make a 5x return in two years or less. What has worked in Silicon Valley in the past for the big-boy VCs may not work there in future, but don't count 'em out elsewhere.

Book review: The Intrusion of Jimmy 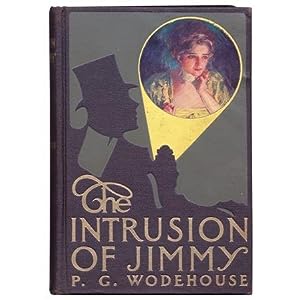 The Intrusion of Jimmy by PG Wodehouse (Rating: *****)

Not a laugh-riot all the way through like a typical Wodehouse but I loved it! The essence of the Wodehouse is there: an involved plot with the puppeteer juggling a hundred strings (to employ a mixed metaphor), all of which resolve themselves satisfactorily at the end. Add a superb understanding of human nature and a dollop of mirth, and there you have your pièce de résistance.

What am I missing here?

Could Tencent buy Yahoo!?, asks Digital East Asia. They expand on the thought with this gem:

With an enterprise value of $18.5 billion (YHOO has $3 bn in cash) – less than a tenth that of Tencent – it’s not too large for them to swallow.

What the hell are these guys talking about? This from the people who describe their website as "a way for Western professionals to begin to make sense of it all." If you want to dismiss a competing website's article on Tencent as "mostly a love letter/warning to Silicon Valley", you'd better make sure you get simple facts right.

This is a post I began while at Echelon 2010 three weeks ago but never got around to finishing. No matter, this isn't a time-sensitive topic.

Listening to Dave McClure's talk on Internet start-ups was, er, entertaining. He made several good, occasionally controversial points such as:

So I generally agreed with all of the above. Except when McClure began arbitrarily applying the perspectives of his Silicon Valley world to entrepreneurship in Asia. His excessively US-focused themes were particularly apparent with the following:

Getting your start-up through tough times

Mohanjit Jolly of DFJ India writes another insightful article. To quote just one hard-hitting statement out of many:

Don’t think that the investors can’t afford to shut the company down, or can’t afford not to fund the company. Usually, the entrepreneur loses that game. Instead, it’s best to tackle the tough situations through collaboration, to anticipate the tough times ahead and have a plan to get through it.

PE falls in the West to rebound in Asia?

The future of social gaming

Still at Echelon 2010, I left a couple of questions for Nicholas Khoo who's moderating the Social Gaming panel, which he relayed to the panel:

We all know that things come in waves in tech. Is social gaming a fad? Have the early guys captured most of the market, bec of n/work effects, branding etc or are we still going to see evolution?

Social gaming is built on social fabric. This isn't a fad. This is forever. In fact, games are only the first good application built on the social fabric.

In the past, gaming was populated by people labelled as geeks and nerds, playing on consoles and PCs.What FB has done is to extend the social gaming user base to your mum, your father, your uncle.

At Echelon 2010 in Singapore yesterday and today. Vishal Gondal of Indiagames and others on the social gaming panel point out opportunities for social gaming beyond just the PC Internet and beyond Facebook specifically.


Zaki Mahomed of Game Ventures thinks that payments still is a barrier to seamless roll-out and adoption of social games in Asia and on the mobile. He says there's no one simple way across games and platforms (OSs, devices, whatever) to make it easy for users to micro-transact within games. People aren't comfortable typing their credit card numbers into a mobile social game. Vishal agrees but with the qualification that in India at least premium SMS is one way to monetise.