Making the best of a bad situation -- without resorting to spin

Received an email a couple of days ago that I thought was very quote-worthy. This is from an online service called Boomerang that went down briefly after a major disruption to Amazon's cloud-computing platform (which this service uses). Here's what the letter reads:

Notice of Boomerang Service Disruption (Apr 22) and our apologies

As some of you noticed, Boomerang service was unavailable this morning. We were impacted by a widespread outage of our hosting provider, Amazon Web Services (AWS). To minimize the disruption, we have been able to mostly restore the service from our backup.

How to make sure all your messages are sent as scheduled
Please click on Boomerang-Outbox label in Gmail and check to see if there any messages that needed to go out. You will need to send them manually (compose a new message, copy-and-paste the content from the message you scheduled, and send it through Gmail) if you don't see them under Messages to Send Later section of Manage Boomerang page at [URL] .

How to make sure all your messages are returned
Please click on Boomerang label in Gmail and check to see if there any messages that should be back in your inbox.

How are we going to make Boomerang more reliable?
Like many startups, we entrusted AWS with virtually our entire infrastructure, including both our production servers and most of our backup systems. We hoped that their systems were independent enough to see us through if something went wrong with one piece of the service, but today's problems reminded us that data centers at that scale are very hard to make independent.
We should have had a better plan in place, and we'll be making one. We'll be working very hard to improve our redundancy in the upcoming few weeks, both because we want you to be able to rely on us to get your messages to the right place when they need to get there, and because mornings like this are making me bald and giving me wrinkles.

Again, we are very sorry for this disruption in our service.

Very, very nice. Why do I like this letter so much?

Yes, I have to finish that travelogue series I began a couple of weeks ago but life keeps interrupting!

I grab a quick breakfast and take a tram to the station to catch my train to Berlin. My ticket is valid for any train I want to take for the next two months. No wonder it was expensive. I'm planning to take the 9am train, which will get me to Berlin at 3.20pm.

Gah. I've missed it. Now I'll only get into Berlin after 5pm.

No, hang on, I've missed the direct but I can take another route changing at Hilversum.

I hop on. Love it. Super-smooth, super-silent train. Busy snapping away at the passing sights. 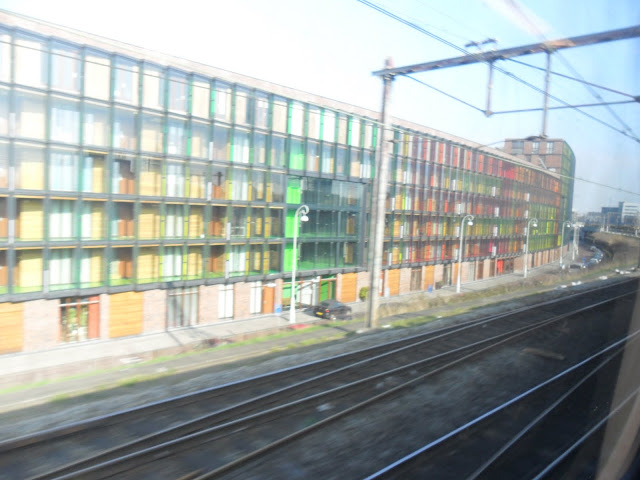 A large factory-like building that I found interesting because it was multi-coloured. Moving shot from the train so a little blurry.

Great. I miss my stop at Hilversum. Shoulda looked at the rail map to have an idea where it was with respect to Amsterdam.

Forced to spend an hour and a half at Amersfoort (?) waiting for the next train to Berlin. I briefly consider taking an Intercity to Enschede, which seems to be on the border of Holland and Germany, and then trying to change again there to a Berlin-bound, but dismiss the thought. Too complicated and who knows if that's even the best route to Berlin!

Finally underway at 1137 on the Hispeed. Effectively the 11am from Amsterdam. ETA Berlin 1720 hrs. Gotta love these take-whatever-train-you-want tickets.

It's time to decide what I'm doing tonight -- staying in Amsterdam or taking a train to Hamburg or Hannover this evening. Or taking a longer journey to Berlin in the morning. Berlin more likely. Two and a half days there followed by two days and a morning in Munich. The girls at hostel reception can't really advise me on this so I decide to go to the train station and ask for advice there.

But first, I rent a bike. 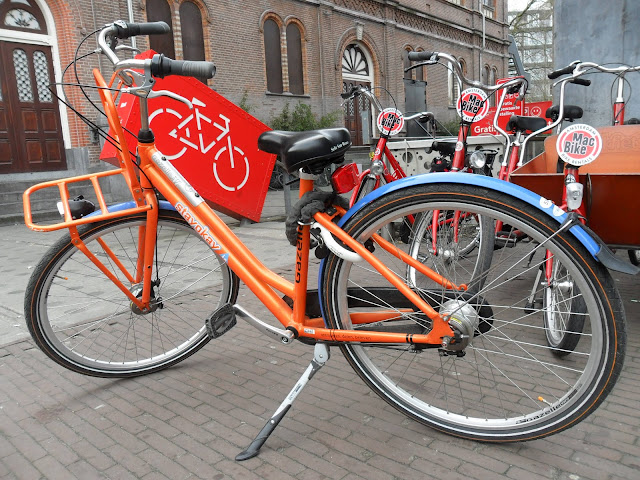 Very heavy but in a comfortable sort of way. No shock absorbers but it feels very "spongy" and very hard to do a track stand on, though I try at every red light I stop at.

I went on a short holiday in Europe a couple of weeks ago so the next few posts are going to be a mini-travelogue. For various reasons, I'm gonna pretend that I'm live-blogging on each day as the action happens.

At Changi airport and, unbelievably, I'm writing work emails at 11pm till the very last minute before I need to run to my boarding gate. Thank goodness for free Internet access.

On the plane and get my first impressions of the Dutch (not that I've never met Dutch people before):

On the whole, a very civilised lot.

One horrible moment on the plane when I thought I'd forgotten my camera! I usually forget to pack something or the other. This trip went without a hitch.

Watched L'age de Raison (The Age of Reason) on the in-flight video. Very nice in parts but only 3.5 stars.

The flight announcements are made in English by a stewardess as usual, followed by a taped Dutch version. Why don't they do this for all flights? Flights to India, China, Germany and Japan, among others, always have stewardesses make the announcements in person in both English and the destination country's language. Why not tape them all including the English ones? Frees the stewardess to do whatever else needs to be done.