« I hope you Like this | Main | Announcing investment in CustomerXPs »

Munich Day 3 and back to Singapore

I had planned yesterday to go buy some more food and beer to take back with me to Singapore. But it’s 8 am now and I’m not going to have time to go to the shops AND the BMW Motorrad Zentrum before taking the train to the airport. Dilemma: beers or bikes? Oh, callous fate, what a position to put a boy in.

By 8.30am, I’ve decided: beers it is. Saw plenty of bikes yesterday and it’s not like I'm going to buy one now. I hope the shops are open.

It’s 9am and I’m at the train station wondering which ticket to buy off the vending machine that'll allow me to go to the city centre and then to the airport. I seem to have more than one choice, the cheapest being 5 euros and the most expensive being 10.80 euros. Only one must be valid surely. I'm examining the info board to see whether I can get by being a cheapo when a passer-by stops of her own accord with "Do you need help?" She tells me which ticket to buy (the expensive one) and then runs off to her train. I continue to dither when she comes back worried that I hadn’t understood, but my ticket pops out just then. Very nice of her especially since she almost misses her train coming back for me. Get on the train and realise, ah, I forgot to take a picture of the hostel!

I’ve got myself some food, beers and wine but lost track of the time. It’s 10.30 am now and I panic. Hope Munich airport is as organised as Changi or I'm in trouble! Almost certainly no time for the shower and shave I’d planned to take in the lounge. There’s nothing I can do about it now though. Que sera, sera. 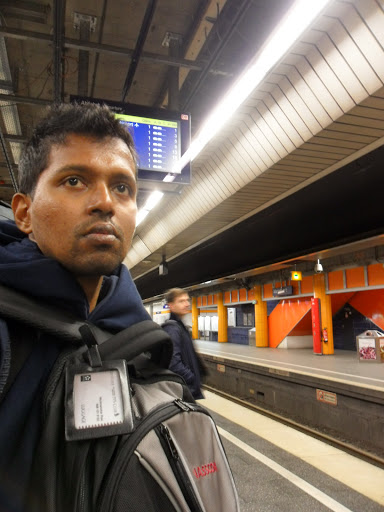 I take stock of myself on the train. Think I've lost a little weight over the holiday. (When I get home later, I learn that this was just wishful thinking.) I've also managed to lose that cold I had when I left Singapore, so that's good. But my lips feel like they were produced in a tannery and sewn onto my mouth. Not so good.

I arrive at Munich airport and it actually surpasses Changi in convenience. Hardly any walking from the train station to check-in. The escalator out of the station leads practically to the check-in desk. Followed by no queues at check-in or at security or at immigration -- am I the only person flying today? -- and the lounge immediately after immigration. Wow.

My backpack has expanded from its original 11kg to 19kg. I deposit it at the Heavy Luggage station as requested and it feels like I’m floating.

Manage to get my shower and shave at the lounge. Probably the best appointed airport bathroom I've ever been in with its sheer size – one could play football in it – and the various buttons and knobs. A minor gripe was the lack of sufficient lighting to shave by. 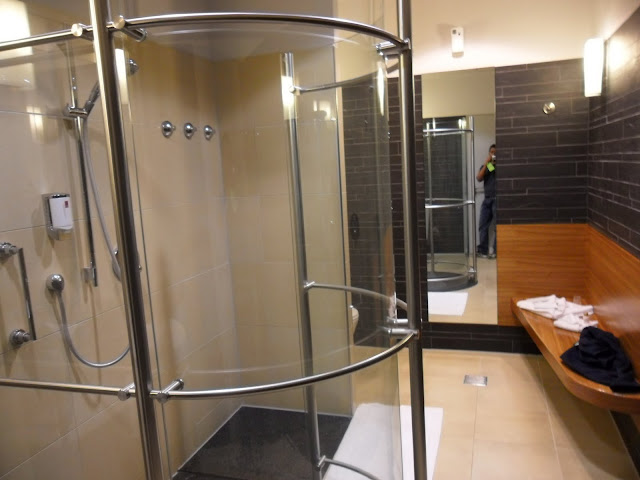 About as big as my bedroom back home. And there's more you can't see in this picture

I grab my last beer in Germany after my shower and add a side of salad. The radish with cream cheese is absolutely delish. So rich that it's no wonder so many Germans are so big! Then I spot the hot food dish – it's Indian curry with rice. I don't touch it.

Lose track of the time again and take off at speed towards my gate. Also not very far away, like everything else before this. Boarding hasn’t been called yet. Flight's delayed by an hour due to some technical error. This is a first for me on SIA. I snap a couple of shots of guys in fluorescent vests poking at the starboard engine. Back to the lounge. Maybe I'll get some rajma and peas after all. And another Weissbier, of course.

They call boarding the moment I gulp down my first mouthful. Of course. The rajma tasted funny anyway.

Boarding the plane and remember that an (Indian) friend of mine lamented to me just two weeks ago that (many) Indians have no sense of personal space. A numbskull behind me keeps bumping my legs with his bag as I walk down the aircraft aisle. I tell him to back off and he apologises. As we come along the aisle to his seat, he springs upon it as though it were the last spot on the last lifeboat off the Titanic, jostling me again in the process. You know, just in case someone else tried to take his RESERVED seat. As I said, numbskull. Then his buffoon friend behind him gets into the act, swinging his bag up to the overhead bin and bumping my elbow and head with it. Then into his seat clumsily, bumping me again. I curse at him loudly and repeatedly. Reminds me of the time I was once in a ticket queue in Bombay when I resorted to standing on one leg with the other extended behind me. Indians love to "optimise" queue space but hate the idea of touching someone's shoes even more. Sure I looked ridiculous, but between being forced to examine the thread count of the shirt in front of me in microscopic detail and looking ridiculous, I’ll pick my flamingo impersonation every time.

The plane finally takes off and before the entertainment system is turned on, we’re treated to a long, self-indulgent, non-destination-specific ad for… SIA. It’s bad enough to be treated as a captive audience for ads for private banks and condos on a flight we’ve paid for, but do passengers really need to watch an ad for SIA when we’re already on an SIA flight? In which universe is this necessary?

We land in Singapore and don’t have any gates available either at Terminal 2 or at Terminal 3! Yet another first. A further 20 minute delay but so what? It’s been a whirlwind but refreshing holiday.

This post is the eighth in a series. The full series: