In just the past 6 weeks or so, I've spoken to five different large corporations with newly launched corporate venture capital operations. Is this just a coincidence or a true trend? Seems like a trend though unscientific, of course.

Let's be clear: each of these has slightly different structures and need to satisfy fairly different goals, such as

Entrepreneurs who seek or are sought out by corporate venturing arms should understand the differences between each approach.

If a trend is truly taking hold, this would mark probably the first renewal of the corporate venturing scene since the dotcom bust. I worked on an academic research project just after the bust to investigate the motivations of corporate venture firms. At that time, corporations were just as caught up in the dotcom frenzy as VCs, entrepreneurs and the general public, but most of them shut down their venturing arms soon after. We'll have to see whether the current trend will prove to be more sustained. It's certainly a possibility, not least because capital markets are currently much more circumspect than they were a decade ago.

After posting this funny video the other day, I had a short exchange with a friend on Twitter: 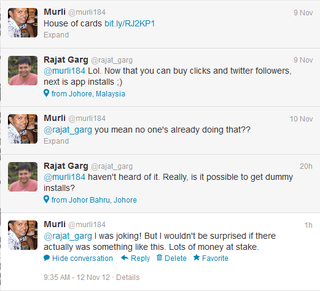 Lo and behold, the FT now reports about fictitious Likes on Facebook. Is this as bad as fake clicks on ads and fake Twitter accounts? No. It's worse.

Fake clicks and fake Twitter accounts are generally generated by software robots. Yes, an advertiser loses money and yes, the advertising platform in question loses credibility. However, fake Likes on Facebook go one step further as the FT reports. Not only do advertisers and Facebook lose out, individual people's identities would seem to be used inappropriately to endorse certain advertisers.

Now, it's easy to see who's directly responsible for creating click fraud schemes and fake Twitter accounts -- individual fraudsters, not platforms like Google or Twitter themselves (though they certainly do take responsibility for policing their platforms). But who's responsible for fake Likes on Facebook?

And like many very funny things, this has more than a grain of truth in it.