Someone on my FB feed shared this post today: 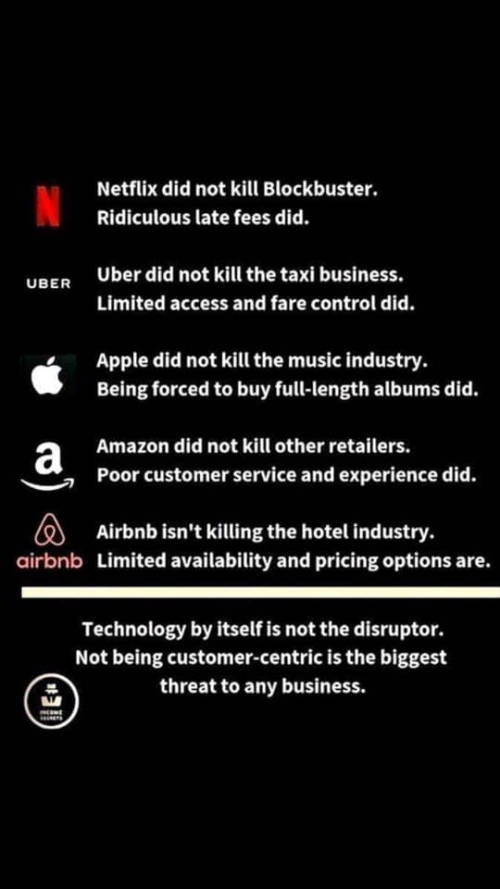 I had two reactions to this. Interestingly, they are contradictory to each other.

My first reaction was a head-slap, face-palm, eye-roll at the lack of nuance in the post. One, none of the incumbents except for Blockbuster is dead. So stop saying they were each "killed" by a tech firm. And two, is lack of customer-centricity the only reason for the troubles faced by the incumbents? Really? And three, is it a foregone conclusion that Uber is a long-term viable business (in its current incarnation)? I'm not so sure.

My second reaction was, "That's just silly. All five arguments as stated here are about price. Not customer-centricity." Which of course replaces the author's single-cause "analysis" with one of my own. Make of that what you will.

I thought I'd revisit my somewhat snarky, dismissive post on Spotify's rumoured current valuation from a few days ago because of the latest news that they recently hit 1 million paying users. They also have more than 10 million free users.

Spotify charges anywhere from GBP 5 to GBP 10 per month for their paying subscribers, putting their current revenue run-rate at anywhere from GBP 60 million to GBP 120 million. In addition, they make some money from advertising. Let's be charitable and assume that their revenue run-rate is at the upper end of my estimate, i.e., GBP 120 million or, in round numbers, USD 200 million.

Now, it's not clear to me whether the rumoured USD 1 billion valuation is pre-money or post-money, but let's say it's post-money. Digital Sky Technologies has invested (or is in talks to invest) USD 100 million at this valuation.

A pre-money valuation of USD 900 million for a company with a USD 200 million revenue run-rate gives us a P/S ratio of 4.5x. Even if my revenue estimate earlier was too charitable, the P/S ratio is at most about 9x. On the face of it, not really that expensive when compared to the universe of Internet and new media companies. Is it?

The massive price multiples that Internet companies generally trade at usually have a few assumptions baked in: vast market potential, network effects enabling a virtuous cycle of continued growth and very high margins. How does Spotify fare on each of these?

Funnily enough, even though I come across as a sceptic on the valuation of the company, as a consumer, I would love to use the service. ("Would love" because it's only available in Europe for now.) I really couldn't care less whether music resided on my local machine or on a server farm somewhere as long as it was accessible to me whenever I wanted it. In fact, I think I prefer it being hosted by someone else -- no hassles around organising and maintaining libraries, having sufficient disk space, ease of navigation, discovery of new content, etc etc. I've never bought a CD in my life. Yes, never. I much prefer services like Grooveshark.

However, I recognise that I might be a bit of a freak. Most people, it appears, still want to have music physically available to them. Streaming services have been available to people for a long time, long before Spotify came along, but they're not as common as buy-and-download services or CD sales. Streaming video and renting movies online has become quite common over the past couple of years (where bandwidth is available) but music hasn't quite followed the same path. I suspect this is because people generally watch any given film once at most whereas music is listened to again and again. Spotify's premium users can download music but I believe the files self-destruct once they stop paying their subscriptions. So, given that Spotify doesn't let its customers buy and keep music forever, will it appeal to the broader market as much as rival services? I suspect not. The implication is that, once it gets past the early adopter crowd, revenue growth is going to plateau.

I'll keep this short. There are no network effects in Spotify's business model. The model is pure B2C with no social elements to it.

Spotify is currently loss-making. Can it make money?

Though I don't have any information regarding their cost structure I imagine what Spotify pays for music licences must be a significant cost. Is this going to go decrease in future (as a percentage of revenue)? I doubt it. If anything, I'd expect it to go up as the labels get greedier. Even if this doesn't happen though, Spotify has no leverage in the model. As subscriptions and revenues increase, I expect -- not having the benefit of reviewing Spotify's contracts with music labels -- that licensing costs will rise in lock-step. How can Spotify make the transition to profitability then? Only by keeping other expenses under control as it grows, such as staff costs, marketing, hosting, bandwidth, etc. I can't imagine the leverage on these expenses is that substantial though. Moreover, if you accept my logic above, I don't see considerable revenue upside from here either, so there's limited scope to play the spread-costs-over-a-larger-revenue-base game.

Based on this brief analysis, does Spotify meet the requirements for being valued as a high-growth, potentially very profitable business? No. It's only about as attractive as a traditional radio station.

The only remaining niggling thought is why DST would agree to these terms then. I don't know. Anyone who wants to enlighten me is welcome to add a comment here.

More than 10m people across European countries use its advertising-supported service to listen to a catalogue of 10m tracks for free, on-demand over the internet. But it has attracted fewer than 1m paying subscribers to its mobile and ad-free premium service, a conversion rate that concerns some record labels investors in the company.

Concern over its business model and the probable returns for artists and labels has held up a planned launch in the US for more than a year, although it is now starting to secure contracts with US labels.

“$1bn is pretty frothy for a loss-making business, whilst growing fast,” said one venture-capital investor in a rival music service.

SIA's changed their pre-flight video! Mr Perfect Pitch stepped on a stair that just wasn't there. Guy next to me must have wondered what the hell I was doing emitting that single note out of the blue.