Please. And, er, butt out of other people's business.

Keep it to yourself

A brand new faith in prosperity

One of the funniest things I've read in a while and the topic is an incongruous mix of Chinese culture, religion and capitalism. Don't say, "huh?" Take a peek for yourself.

What non-religious movements can learn from religion

Here's a thought-provoking TED talk by Alain de Botton, who has also written Religion for Atheists: A Non-believer's Guide to the Uses of Religion. He makes the case for taking the best aspects of organised religions and religious institutions and applying them not just to atheism, but also to companies, small entrepreneurs, art and so on. 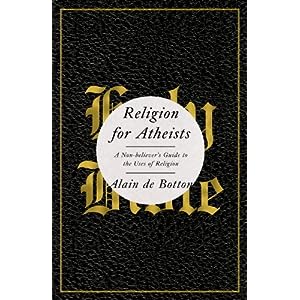 Fry and Dawkins on giving respect and taking offence

Loved this short video clip. Really doesn't say as much about Hitchens or even about religion as it says about logic or clear thinking.

Dawkins and Fry on Hitchens' Penchant for the Offensive

A friend posted an interesting thought on his Facebook page a few days ago that I thought I'd share:

People talk about Golden era of this and that being 50+ years ago and wish they were there. I wonder what are we in the golden era of now?

We are in the golden era of tech n biotech innovation!

To which my friend pointed out:

I don't know - its not like we sit in awe of the next technological or biotech innovation - much like years ago when flying was a super exciting event or when everyone gathered to watch the space launch. These days people couldn't even care less about the space shuttle launches!

Someone else then added:

The only thing which gets people as excited as you say nowadays is soccer in Europe and S.America, Superbowl for N. America, Cricket for Indians and Chinese New Year for the Chinese, the movie Titanic in 1997 and iPhone, iPods, X-Box, playstations and Harry Porter in general..... Some Hollywood and some bollywood movies also tend to make people queue overnight for tickets.....
So you can say we are in the Golden age of culture and sports....
May be we live in the Golden age of metro-sexuality, bi-sexuality, transsexuality......

You have a very valid question... but the answer to it is that we live in the Golden age of "something" that only the future generation may refer to as "Golden" and for us is just plain everyday "bull-s**t" :-)

And then I piped in with:

I think there are no more golden eras left. Things move too fast for that and like [the guy above] points out, there isn't one thing that rivets the world... very little homogeneity. It's like a comment I read once made by a film critic or gossip columnist or something. Went something like- in the Golden Age of Hollywood, we had Stars, but today we only have celebrities.

Maybe if someone looked back a thousand years from now at the scale of a few hundred years, they'd find a Golden Age of something. Innovation? Creativity? The spread of the rule of law? The emergence of intelligence at the level of our entire species (as opposed to individuals or groups of individuals) enabled by boring stuff like better education but also by better tech? Overt religiousness? The rise of Big Oil? Ok, just kidding about that last one!

What do you think?