"One by two" is a quintessentially Indian term. Every Indian understands it and I would guess that no non-Indian does. It's a phrase heard frequently at one's local "chai-wallah" or tea-shop. What does this cryptic phrase mean?

Indians in most parts of the country like their tea and often drink it several times a day. The first thing you're offered when you enter a meeting or someone's home, no matter what time of day it is, is a cup of tea. Those not familiar with Indian tea should be forewarned that it may not be the kind of tea you'd expect to find in China, Japan, the US or other parts of the world. Indian tea is made with black tea leaves and is usually quite milky and very sweet.

Even growing up drinking this kind of tea, you wouldn't be expected to drink large quantities of it in each sitting.

Combine that with Indians' famous tendency towards frugality and resource optimisation, and you come up with "one by two". Which means, when you order tea at the local tea-shop, "split a cup of tea into two halves, please" for yourself and a friend. 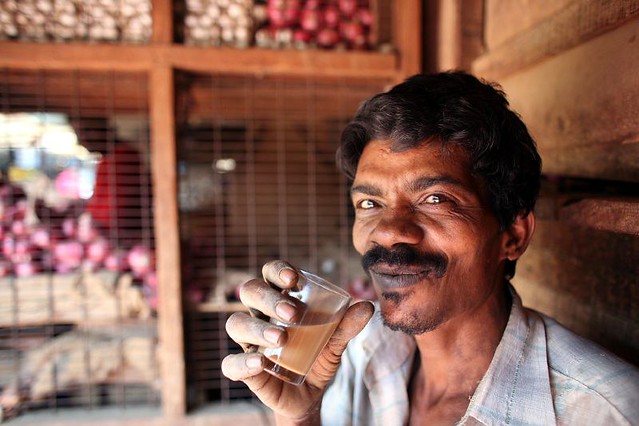 As you can see the standard tea cup isn't very big to begin with. Two or three gulps and it's gone. Yet, "one by two" is by no means an absurd request, and definitely a quite common one at roadside tea stalls.

Why am I blogging about tea all of a sudden? Because the other day I heard the phrase "three by five"! That really made me do a double-take. Most interestingly (and here, I shall resort to bullets):

The other thing that struck me recently in similar vein was India's recent launch of a Mars-bound spacecraft called Mangalyaan. As this piece in the New Yorker points out,

The I.S.R.O. has a reputation for austerity, exemplified in a famous photograph from 1981 of India’s APPLE satellite being transported on a bullock cart. The agency’s scientists are paid between twelve hundred and two thousand dollars a month, and, unusual for space programs, its equipment is endlessly tweaked and recycled: the rocket that carried the Mars orbiter into space was adapted from a launch vehicle that first flew in 1993. Only one physical model of Mangalyaan was ever produced. (The I.S.R.O. relied extensively on software for testing.)

All of which should interest and inform India-watchers and those who do business there. Remember that many (but not all) people and institutions see strength in frugality. It's not a "right" or "wrong" way of doing things; just a different way of doing things compared to many other parts of the world. Don't let yourself be surprised.

Also watch out: sometimes, the philosophy of frugality gets abused and taken to an extreme.

A few days ago, I spoke to Connie Loizos, a San Francisco-based ex-Thomson Reuters editor, who's now set up StrictlyVC. I highly recommend StrictlyVC's daily email newsletter for its brevity, breadth of coverage and lack of nonsense news.

This is a re-post of the somewhat abridged interview from her website.

Singapore Sling: Entrepreneurs Head In – and Out – of Tiny Island Nation

Murli Ravi is the head of South Asia investments for JAFCO Asia, and from his perch in Singapore, he’s never seen so much cross-border activity as in the last 12 months. “Let’s just say I’ve made three trips the U.S. in 2013. I made zero trips to the U.S. in the four years prior,” he observes.

Late yesterday, I Skyped with Ravi to learn more.

Globalization is an ongoing trend. What are you seeing?

I cover a lot of territory – Southeast Asia, India, Australia – and I’m seeing a preponderance of people not just coming to Singapore and staying here, including U.S. companies, but I’m seeing startups in Singapore whose attitude is to quickly expand. I see many more of them looking to enter China and India, which are both about five hours away [from Singapore] by plane, and even sometimes Japan and Europe and the U.S.

What’s changed in the last 12 months?

I think Southeast Asia as a whole just has a much larger pool of talent coming online now for startups to harness. Also, historically, broadband penetration wasn’t high. Incomes were low. The smart guys would typically leave. All of those patterns are reversing.

What types of companies are coming to Singapore from the U.S.?

Broadly, you have a lot of small U.S companies and Australian companies and even Japanese companies that are realizing that Southeast Asia is an interesting market. If you just look at the English-speaking countries across the region – India, Australia, Singapore, Malaysia, the Philippines, and almost all the others have some English in a business context – that’s close to two billion people, or roughly 30 percent of humanity.

You also see companies move here because [their product is better suited to the market in Asia]. I sit on the board of a company called Bubbly, formerly Bubble Motion, that was founded in the Valley but moved to Singapore.

I remember reading about that move and thinking that it boiled down to lower costs for the company.

Well, Bubbly is a social messaging service like Twitter, except that instead of read and tweet, you speak and listen, which also appeals to the markets here. Unlike on Twitter, where you’re talking to the world and hoping someone will talk back, with Bubbly, it feels like someone is talking to you because you hear them in your ear, whether it’s a friend or a celebrity who has recorded a message about picking up her kids or an upcoming show. Unlike on Twitter, by the way, consumers here are also willing to pay to listen to celebrities. Right now, the biggest markets for Bubbly are India, Japan, Indonesia, Philippines – all of which have their own celebrities.

Do other recent transplants jump to mind?

A couple of other companies that have taken the same route are Vuclip — which hasn’t quite moved its headquarters to Asia, but does focus mostly on Asian and especially Indian audiences — and Mig33 — which did move and has seen success in Indonesia in particular.

You also have companies like Line and Kakaotalk that didn’t originate in Southeast Asia but now have a huge user base in this region. Coincidentally or otherwise, these messaging companies have a lot of similarities with Bubbly.

What about enterprise companies?

It’s so far been a little less common for enterprise companies to move here, and I see that as a major untapped opportunity. There are lots of inefficiencies in the way big business is done in some of the countries here, which gives more competitive firms from elsewhere a potential advantage if they choose to come here. Equally, some startups from this region who are able to thrive here have shown that they are quite capable of stepping onto the world stage, because the historical lack of resources available to small companies is a sort of trial by fire.

For another perspective on the same topic, see this piece from Techinasia, which ends on a surprisingly downbeat note: No surprise, Asia tops the charts for internet and mobile growth, but are Asian startups ready?

The Internet, as predicted in 1981

Whither Twitter, whither media agencies? (Bonus feature: a conspiracy theory!)

How scared are media and advertising agencies of this development (PDF; 384 KB)? I'd be petrified if I was them.

If you don't have time to look at that document, here's the two-sentence snapshot: Mondelez (the renamed Kraft snack food group) has done a deal with Twitter where Twitter staff will be seated in four Mondelez offices around the world, helping Mondelez with their real-time marketing by providing real-time insights, custom research and so on, in return for a minimum ad spending commitment. In effect, Twitter has turned itself into an agency.

Mondelez announced a similar deal, though more limited in scope, with Google back in May.

Now, before anyone starts jumping up and down with objections, I know that this isn't really a replacement for agencies. But it is a significant development that agencies and advertisers will be watching, and for Twitter itself as it positions itself for an IPO. If large digital platforms like Twitter and Google are able to directly provide custom services to large brands, where does that leave agencies?

On the other hand, the agency business model has historically changed so much in response to market developments that I have no doubt the smartest ones out there will continue to reinvent themselves and thrive. For example, when online advertising first started to get going, a lot of agency unbelievers thought that the Internet would disaggregate agencies entirely. Exactly the opposite happened as agencies started online trading desks to buy ad impressions on clients' behalf, started doing creative and copy for digital ads, designed online campaigns and so on.

For whatever reason, I couldn't find mentions of this news online when I checked a few hours ago, not on FT.com or on any other website. Gentlemen, start your conspiracy theories now.

Excerpt: "My wife Emily had a Little, Big Idea recently. Subscription boxes are a big deal in the States, but not yet in the UK or Europe. She thought it would be interesting to see if she could get a craft subscription box off the ground. I spent a couple of hours making her a logo, she wrote one blog post, no website, no big plan required, and now she has a little business, the Crafty Fox Box, growing. She’s had to learn as she’s gone along, but rather than taking months to get the idea perfect, she just started it. It’s a liberating way of doing things, and she’s already started her second, a stationery subscription box: paper.do."

PCs? Let's not even talk about it.

But, says Meg Whitman, "Cloud is a funny word, because when you say it, people think it’s all like Amazon’s cloud. But [HP's] private cloud business is much, much bigger than Amazon’s public cloud."

Can the Internet Replace Big Banks?

Excerpt: "We've seen digital technology disintermediate everything from record companies to university curriculum. Yet banking has remained rather immune to all this disruption. Sure, ATMs and online banking may threaten the bank teller's union, but central banking's monopoly over money has hardly budged. Just like we have to get our food from real plants and animals, we have to get our money from real banks. Or at least it appears that way to most of us." 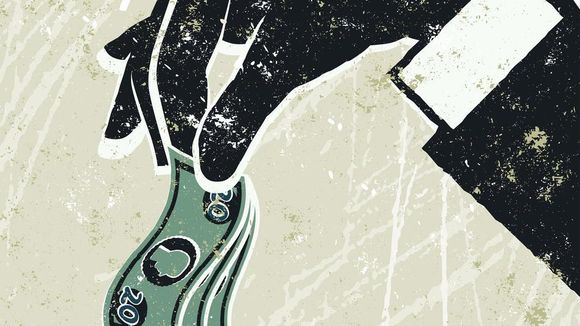 When you sit down with the burly Texan, inside Facebook’s Northern California headquarters, he takes the Open Compute philosophy to new extremes, revealing the blueprint for a computer server that doesn’t even look like a computer server. This design lets you add or remove a server’s primary part — the processor — whenever you like. Nowadays, if you want a new processor, you need, well, a new server. But Frankovksy and the Open Compute Project aim to change that, sharing the new design with anyone who wants it.

“By modularizing the design, you can rip and place the bits that need to be upgraded, but you can leave the stuff that’s still good,” Frankovsky says, pointing to memory and flash storage as hardware that you don’t have to replace as often as the processor. “Plus, you can better match your hardware to the software that it’s going to run.” The frequent fliers who flew too much

Excerpt: "There are frequent fliers, and then there are people like Steven Rothstein and Jacques Vroom. Both men bought tickets that gave them unlimited first-class travel for life on American Airlines. It was almost like owning a fleet of private jets."

More troubles catching up to the Indian e-commerce industry